For highly-skilled foreign workers applying for a new work visa or an extension, the stakes involved just got a whole lot higher.

The U.S. Citizenship and Immigration Services recently updated its guidance, taking a much stricter approach to approving applications that are largely filed by those seeking work in the tech industry.

Under the new policy, which goes into effect Sept. 11, agents will be able to deny applications deemed incomplete or containing errors, without first asking applicants to address the flaw or warning them of an intent to refuse their submission. Recently the agency also widened the range of cases for which it could begin the process of removing foreign nationals to include those whose immigration benefits, such as work status, have been denied.

The measures are likely to disproportionately affect those whose applications require large amounts of supporting evidence, said Sarah Pierce, a policy analyst with the Migration Policy Institute. Employees with H-1B visas — mostly held by people in the technology, science and medicine industries — are currently often asked to respond to a request for evidence from USCIS to prove whether they are qualified for their work, or whether their job is considered a specialty occupation, Pierce added.

The updates could make small errors on filings lead to harsh consequences — including deportation — and are part of “a broader trend of USCIS becoming more of an enforcement agency than an immigrants benefits agency,” Pierce said. The USCIS in February updated its mission statement to remove reference to the U.S. as a “nation of immigrants” and instead included language on “protecting Americans” and “securing the homeland.”

In April, the USCIS said it received 105,000 more H-1B applications than it can grant, according to a National Foundation for American Policy report. Still, Apple Inc., Amazon.com Inc., Microsoft Corp., Intel Corp., Alphabet Inc.’s Google and other U.S. tech giants saw an increase in the number of H-1B applications approved in 2017.

A Glut of H-1B Visa Applications

The number of applications for H-1B visas has far exceeded the 85,000 annual cap on awards in recent fiscal years 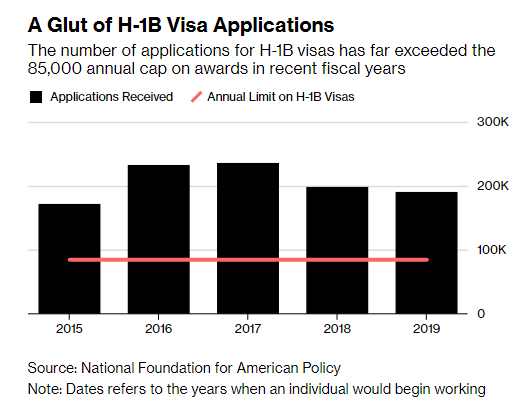 Note: Dates refers to the years when an individual would begin working

And it could affect more than just tech companies, Schulte said. “Cracking down on legal immigration is simply this: It’s encouraging innovation and job growth to happen someplace else.” Microsoft Corp. expanded its Vancouver office several years ago, in part due to Canada’s more lax visa regulations.

The updated USCIS policies add a layer of instability for employers. “There’s a chance that not only is the case going to be denied, but also that the beneficiary could be placed in removal proceedings,” said Hassan Ahmad, managing attorney with the HMA law firm. “How can you do business with this type of uncertainty?”

USCIS spokesman Michael Bars said the policy changes are part of an effort to help “cut down on frivolous applications, reduce waste, and help ensure legitimate, law abiding petitioners aren’t undermined by those able to game our system.”

The number of requests for evidence to H-1B visa petitions rose 45 percent for the period of Jan.1 to Aug. 31, 2017 from the same period a year earlier, according to a report by Reuters. Given the volume of the requests, “it may seem like it would be a natural option” for USCIS officers to want to leverage the new policies to avoid issuing additional RFE’s, said Anastasia Tonello, president of the American Immigration Lawyers Association. But without the requests for evidence, applicants don’t have an opportunity to explain themselves if they make a mistake that could be as minor as writing their work address incorrectly on an application, she said.