AILA provides a practice alert to address news that DHS is reportedly considering new regulations that would limit the ability of certain H-1B workers who are in the green card process to obtain an extension of their H-1B status beyond the sixth year.

The Department of Homeland Security (DHS) is reportedly considering new regulations that would limit the ability of H-1B workers who are in the lawful permanent residence (LPR) process to obtain an extension of their H-1B status beyond the usual six-year limit of authorized stay. The reported proposal, which arises from President Trump’s “Buy American, Hire American” executive order, could impact thousands of H-1B workers and their families, many of whom have been waiting in line for a green card for years.

Under current law, the American Competitiveness in the Twenty-First Century Act (AC21) has two provisions, section 104(c) and section 106(a), which enable DHS to grant an H-1B extension to an H-1B worker who has reached the six-year limit if certain milestones in the LPR process have been met. These two provisions are summarized below: 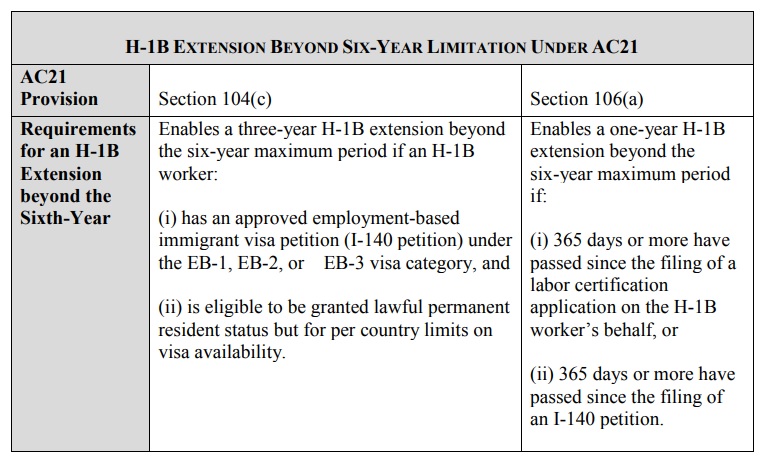 DHS is reportedly looking at whether it can stop approving H-1B extensions for H-1B workers who meet the requirements of section 104(c), by reinterpreting the “may grant” language as discretionary, and therefore that DHS may, but is not required to, approve such H-1B extensions.

To date, DHS has not issued a proposed regulation or formal announcement regarding its intention to change its long-standing practice in adjudicating H-1B extensions under AC21. For DHS to implement such a change, it would need to issue a proposed regulation and follow the notice and comment rulemaking procedures set forth in the Administrative Procedure Act. That could take months. Any policy change before that could be subject to litigation. Moreover, any final rule could also be subject to litigation.