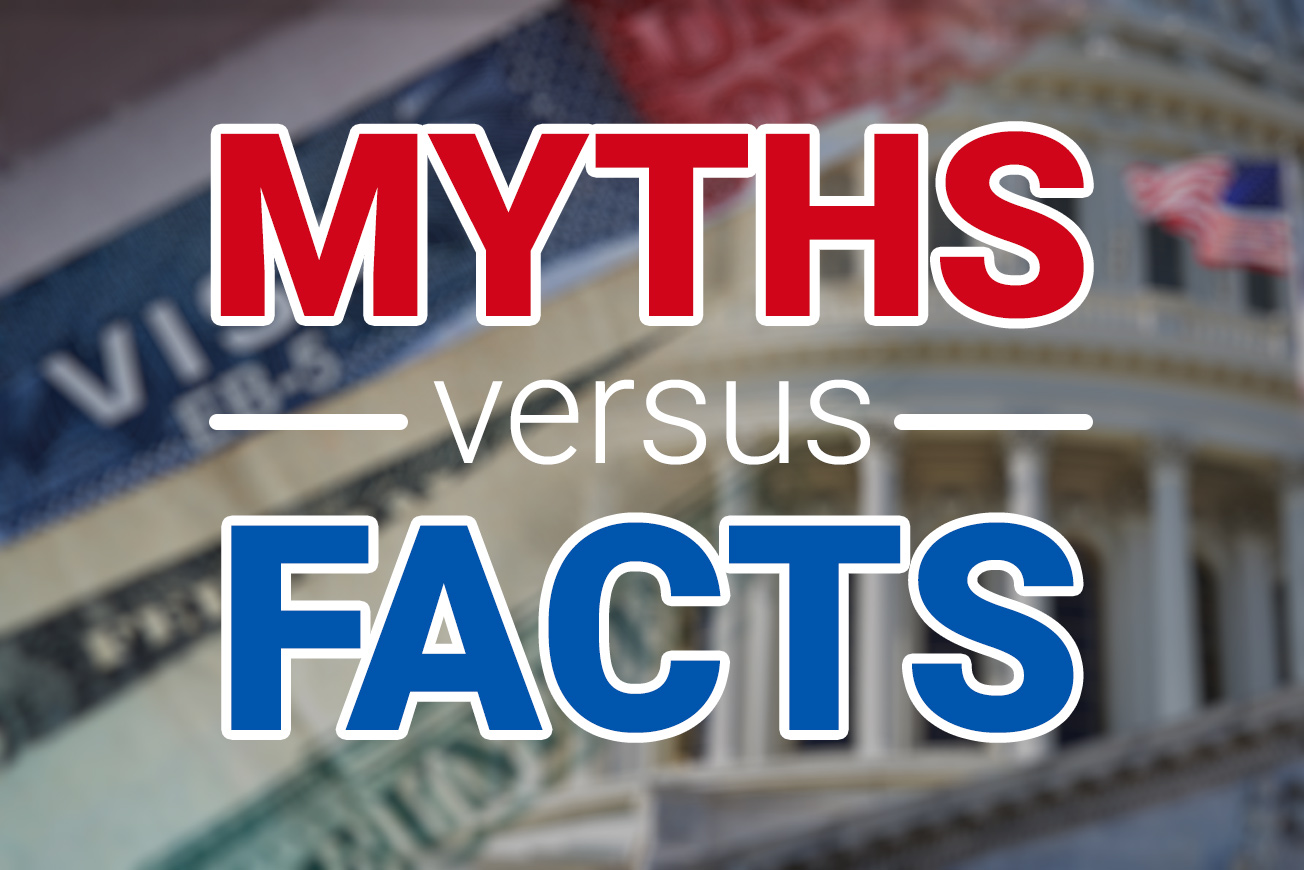 There are a lot of misconceptions and presumptions about immigration law that prevent foreign nationals from getting immigration benefits. Below are three most common immigration myths that are important to know about.

Myth No. 1 If a foreign national gets a divorce from his/her U.S. citizen or permanent resident spouse, (s)he will automatically lose their Green Card.

If you are a beneficiary of a spousal petition and obtained your Green Card though a marriage to a U.S. citizen or a permanent resident, divorce can definitely complicate things for your further immigration process. However, it does not mean that your status will be automatically revoked and your Green Card will be taken away. It is important to understand exactly at what step of the immigration process you are at the time of your divorce.

If you get a divorce before your Green Card application is approved by USCIS, then, in most cases, the process cannot be continued. In this case, you will lose your eligibility for a Green Card.

If a divorce occurs after an application for Green Card is approved, then there should not be any problems with your already acquired temporary (2 years) status.

If you first obtain a “conditional” Green Card valid for two year and then get a divorce, you might face complications when filing I-751 petition to remove conditions of your Green Card. It does not mean, though, that your application will be automatically rejected. It just means that immigration officers will address your case with a higher level of scrutiny and you will have to present solid prove that your marriage, even though no longer effective, was bona-fide. Although this scenario is riskier, it is possible to get an approval.

If you divorce your U.S. citizen or permanent resident spouse at any time after you obtain your permanent Green Card, you should not have any issues with renewing your Green Card later.

Divorce might affect your eligibility for Naturalization if you are planning to apply for such benefit only 3 years after becoming a U.S. resident. Immigration law says that you have to be in the marital union at the moment of applying for citizenship and up until you take the Oath of Allegiance during the Naturalization ceremony. So, if divorce occurs at any time before that final step, you will lose your eligibility for citizenship. However, keep in mind that divorce will only affect your eligibility for becoming a U.S. citizen if you are applying based on being married to a U.S. citizen or permanent resident for three years. You have an option to wait two more years and apply based on being a Green Card holder for five years. In this case, divorce should not affect your application.

Myth No. 2 Undocumented immigrants can adjust their status in the U.S. if a family or employment immigration petition is filed on their behalf.

Even though some undocumented immigrants are eligible for adjustment of status without the need to leave the U.S., in most cases, out-of-status immigrants, present in the U.S. illegally, are required to obtain I-601 Unlawful Presence Waiver, leave the country, and then re-enter back legally in order to proceed with a Green Card application.

There are a few exceptions from this requirement, though.

To recap, if you do not have a legal entry, and do not qualify under the “Section 245(i)” law, you will most likely have to leave the U.S. to enter back legally in order to adjust your status and obtain Green Card.

Myth No. 3 Foreign nationals with a criminal record are not eligible for any immigration benefits.

Although a criminal record might affect your immigration process, there are only specific crimes that make you inadmissible, meaning not eligible for any type of the U.S. visa or Green Card. The Immigration and Nationality Act (INA) provides a list of crimes that can make an individual inadmissible.

For immigration purposes, crimes are divided into two categories:  (a) crimes of moral turpitude and (b) aggravated felonies. The first refers to any act that is contrary to justice, honesty, or good morals as well as fraud, vileness, or depravity in the private and social duties that a person owes to his or her fellow citizens or to society in general, regardless of whether it is punishable as a crime.

Under the INA, for some of the crimes, a waiver can be obtained. However, no waiver is permitted for murder, criminal acts involving torture, or drug trafficking offenses.

Each immigration case is unique. What worked for one person might not suit another and vice versa. It is strongly recommended to consult with an expert in immigration law who can advise and help to choose the right option for you. At Root Law Group, we offer free in-office consultations with our experienced immigration attorneys. Call us today at (323) 456-7600 to schedule your appointment!