The Biden administration is acting on a number of fronts to reverse Trump-era restrictions on immigration to the United States. The steps include plans to boost refugee admissions, preserving deportation relief for unauthorized immigrants who came to the U.S. as children and not enforcing the “public charge” rule that denies green cards to immigrants who might use public benefits like Medicaid.

President Joe Biden has also lifted restrictions established early in the coronavirus pandemic that drastically reduced the number of visas issued to immigrants. 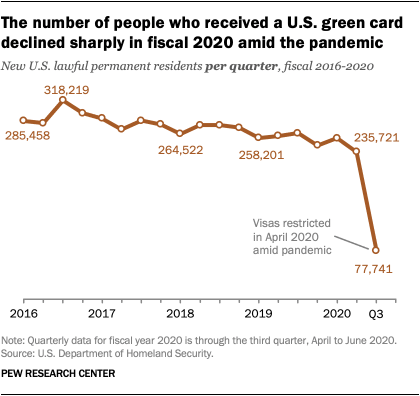 Biden’s biggest immigration proposal to date would allow more new immigrants into the U.S. while giving millions of unauthorized immigrants who are already in the country a pathway to legal status. The expansive legislation would create an eight-year path to citizenship for the nation’s estimated 10.5 million unauthorized immigrants, update the existing family-based immigration system, revise employment-based visa rules and increase the number of diversity visas.

Overall, more than 35 million lawful immigrants live in the U.S.; most are American citizens. Many live and work in the country after being granted lawful permanent residence, while others receive temporary visas available to students and workers. In addition, roughly 1 million unauthorized immigrants have temporary permission to live and work in the U.S. through the Deferred Action for Childhood Arrivals and Temporary Protected Status programs.

Here are key details about existing U.S. immigration programs, as well as Biden’s proposed changes to them: 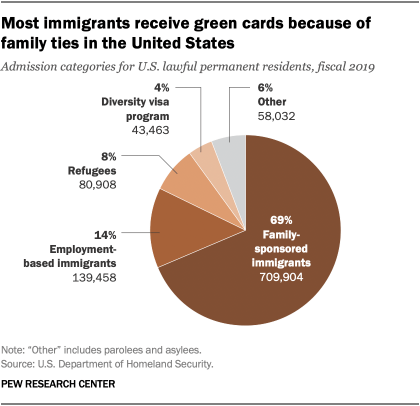 In fiscal 2019, nearly 710,000 people received lawful permanent residence in the U.S. through family sponsorship. The program allows someone to receive a green card if they already have a spouse, child, sibling or parent living in the country with U.S. citizenship or, in some cases, a green card. Immigrants from countries with large numbers of applicants often wait for years to receive a green card because a single country can account for no more than 7% of all green cards issued annually.

Biden’s proposal would expand access to family-based green cards in a variety of ways, such as by increasing per-country caps and clearing application backlogs. Today, family-based immigration – referred to by some as “chain migration” – is the most common way people gain green cards, in recent years accounting for about two-thirds of the more than 1 million people who receive green cards annually. 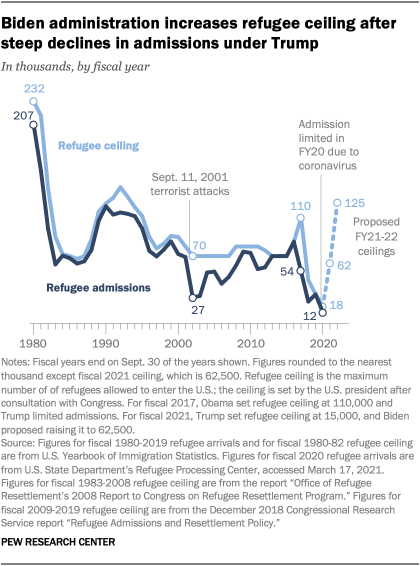 The Biden administration has said it will increase the number of refugees admitted to the country. The new proposed admission caps would be 62,500 refugees for the current 2021 fiscal year and 125,000 for the 2022 fiscal year, which starts in October.

The U.S. admitted only about 12,000 refugees in fiscal 2020, reflecting a suspension of admissions during the coronavirus outbreak. This was down from nearly 54,000 in fiscal 2017 and far below the nearly 85,000 refugees admitted in fiscal 2016, the last full fiscal year of the Obama administration.

In fiscal 2019, the U.S. government awarded more than 139,000 employment-based green cards to foreign workers and their families. The Biden administration’s proposed legislation could boost the number of employment-based green cards, which are capped at about 140,000 per year. The proposal would allow the use of unused visa slots from previous years and allow spouses and children of employment-based visa holders to receive green cards without counting them against the annual cap. These measures could help clear the large backlog of applicants. The proposed legislation also would eliminate the per-country cap that prevents immigrants from any single country to account for more than 7% of green cards issued each year.

Each year, about 50,000 people receive green cards through the U.S. diversity visa program, also known as the visa lottery. Since the program began in 1995, more than 1 million immigrants have received green cards through the lottery, which seeks to diversify the U.S. immigrant population by granting visas to underrepresented nations. Citizens of countries with the most legal immigrant arrivals in recent years – such as Mexico, Canada, China and India – are not eligible to apply.

The Biden administration has proposed legislation to increase the annual total to 80,000 diversity visas. President Donald Trump had sought to eliminate the program. 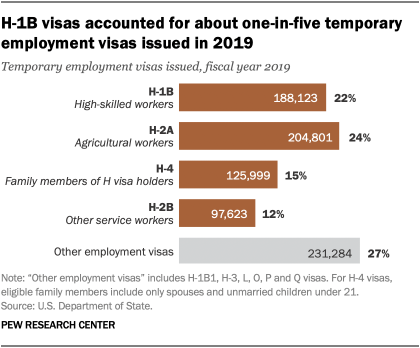 In fiscal 2019, more than 188,000 high-skilled foreign workers received H-1B visas. H-1B visas accounted for 22% of all temporary visas for employment issued in 2019. This trailed only the H-2A visa for agricultural workers, which accounted for nearly a quarter (24%) of temporary visas. In all, nearly 2 million H-1B visas were issued from fiscal years 2007 to 2019.

A relatively small number of unauthorized immigrants who came to the U.S. under unusual circumstances have received temporary legal permission to stay in the country. One key distinction for this group of immigrants is that, despite having received permission to live in the U.S., most don’t have a path to gain lawful permanent residence. The following two programs are examples of this:

About 636,000 unauthorized immigrants had temporary work permits and protection from deportation through the Deferred Action for Childhood Arrivals program, or DACA, as of Dec. 31, 2020. One of Biden’s first actions as president was to direct the federal government to take steps to preserve the program, which Trump had tried to end before the Supreme Court allowed it to remain in place. DACA recipients, sometimes called “Dreamers,” would be among the undocumented immigrants to have a path to U.S. citizenship under Biden’s immigration bill. Senators have also proposed separate legislation that would do the same. 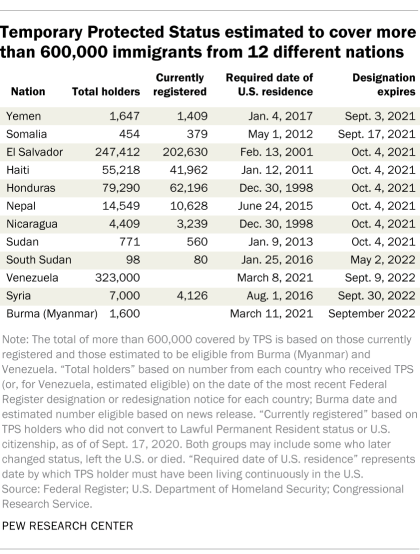 The Biden administration has made immigrants from Venezuela and Burma (Myanmar) newly eligible for Temporary Protected Status, or TPS, a program that gives immigrants from select countries time-limited permission to live and work in the United States.

Overall, it is estimated that more than 600,000 immigrants from 12 countries – potentially including more than 300,000 Venezuelans – currently have or are eligible to have a reprieve from deportation under TPS, which covers those who fled designated nations because of war, hurricanes, earthquakes or other extraordinary conditions that could make it dangerous for them to live there. (The estimated total is based on those currently registered and those estimated to be eligible from Burma and Venezuela.)

Biden has asked Congress to pass legislation that would allow TPS recipients who meet certain conditions to apply immediately for green cards that let them become lawful permanent residents. TPS currently does not make people automatically eligible for permanent residence or U.S. citizenship. The Trump administration had sought to end TPS for nearly all beneficiaries, but was blocked from doing so by a series of lawsuits.