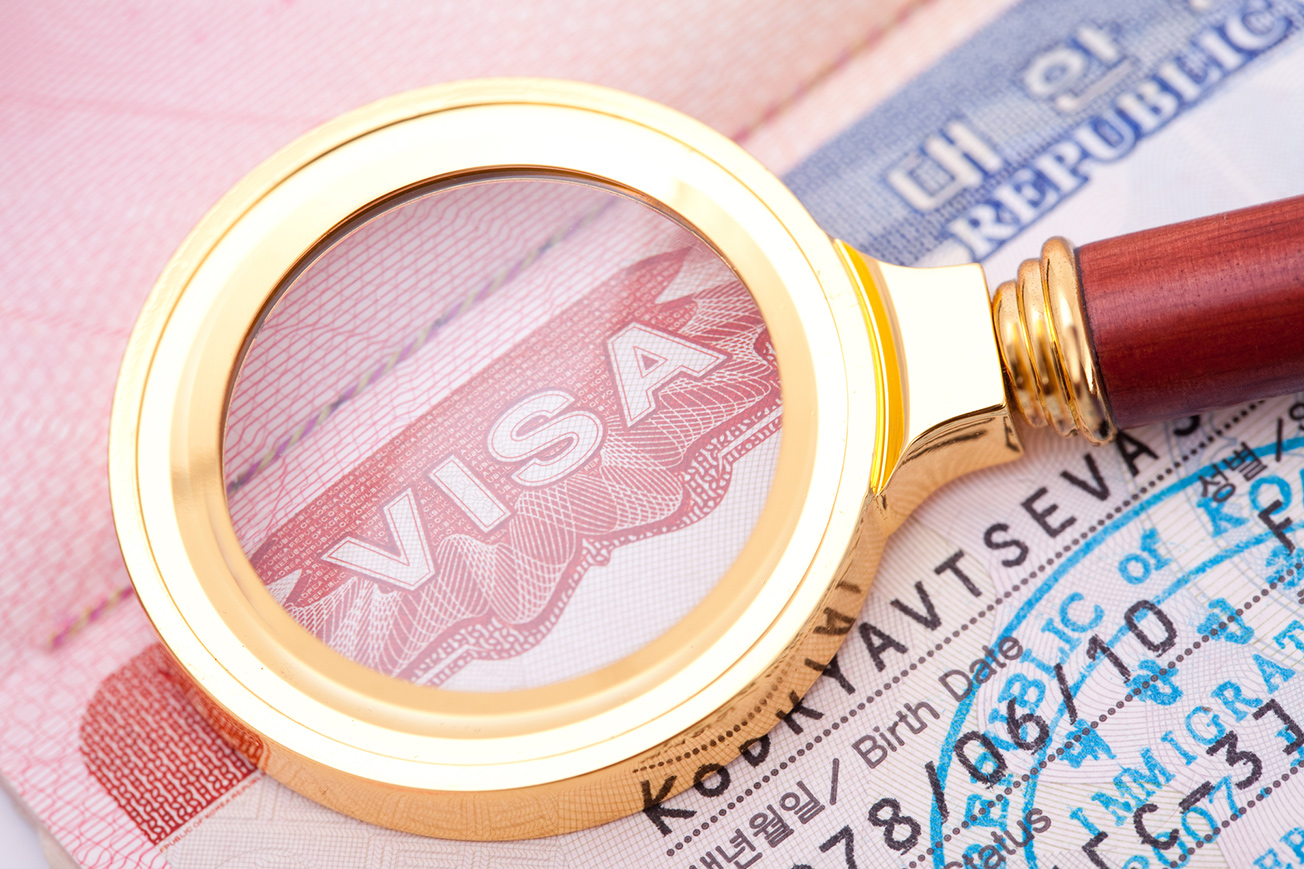 A citizen of a foreign country who wishes to enter the United States must be in possession of a valid unexpired passport issued by his or her country of citizenship. This individual may apply for a visa, which is placed on his or her passport. This may be done at the U.S. Consulate having jurisdiction over the place of residence of the individual seeking a visa.

It is also important to know that there are generally three types of visas: non-immigrant, immigrant and visa waiver. A non-immigrant visa allows an individual to travel to the U.S. for a temporary period of time while the immigrant visa allows an individual to reside permanently in the United States. Under the visa waiver, some individuals of certain countries may be eligible to travel to the U.S. without a visa, in the event they meet the necessary requirements for this type of visa.

WHAT TYPE OF VISA DO I NEED?

U.S. Immigration law defines the type of visa you must obtain before attempting to enter the U.S. The type of visa often relates to the purpose of your intended travel.

Generally, all foreign nationals, in most cases require a non-immigrant visa to enter to the United States. There are multiple types of non-immigrant visas one can obtain to enter the U.S. The visa must be valid and unexpired at the time of making an entry to the U.S. For example: An individual coming to the U.S. for pleasure would require a visitor visa (also known as a B-2 visa). This type of visa generally allows the individual to remain in the United States for a temporary stay.

In the case where a foreign national is seeking to permanently residence in the U.S., he or she must obtain an immigrant visa. This type of visa is generally obtained through a family sponsorship, employment sponsorship or even visa lottery.

The third type of visa available to foreign nationals of certain countries, is a visa waiver. Under the visa waiver program, individuals of countries designated by the U.S. State Department are allowed to enter the U.S. by simply being in possession of their valid unexpired passport. These individuals are generally allowed to remain in the U.S. for 30 days.

WHAT TYPE OF NON-IMMGRANT VISAS ARE THERE?

WHAT IS U.S. NON-IMMIGRANT STATUS?

Once a citizen of a foreign country has obtained a non-immigrant visa for the purpose of intended travel, and has been admitted to the United States, he or she is placed a stamp on his or her passport at the port of entry.

For example: If the individual obtained a visitor visa (B2 Visa) and has been admitted to the U.S. Once admitted, that person is considered to be on B2 non-immigrant visa status.

HOW LONG AM I ENTITLED TO REMAIN IN THE U.S.?

WHAT IS AN ARRIVAL/DEPARTURE RECORD AND WHY DO I NEED ONE?

The Arrival/Departure Record (I-94, I-95 or I-94W) is the document that is issued to you by a Customs and Border Patrol (CBP) officer at the port of entry. This document contains your personal information but most important, it shows the date you arrived in the United States and it also shows the date until which you have been admitted. Consider your Arrival/Departure record is also your temporary permit to remain in the U.S.

It is important that you surrender your Arrival/ Departure Record to the proper authorities on your departure. The return portion of your Arrival/Departure Records will serve you as evidence that you have not violated any U.S. laws by staying beyond the period of time which you were granted upon admission to the U.S.

HOW DO I APPLY FOR A REPLACEMENT OF MY ARRIVAL DEPARTURE RECORD IF IT IS LOST?

Do not worry. You may apply for a replacement of your Arrival Departure Record by filing an application to replace your Arrival Departure Record (Form I-102) with the United States Citizenship and Immigration Service (USCIS) with the appropriate filing fee. The application must be filed at the USCIS office having jurisdiction over the place of your temporary residence in the United States.

EMBASSY vs. CONSULATE: WHAT’S THE DIFFERENCE?

Because of continuous interaction between countries worldwide, in today’s world, diplomatic office are needed around the world in each country to aid and allow multiple interactions to occur. Embassies and Consulates, found worldwide, are the result of such diplomatic relationships.

Often, the terms Embassy and Consulate are used together yet they are different. An embassy is larger and more important as it is described as a permanent diplomatic mission, often located in a county’s capital city.

An embassy is responsible for representing the home country abroad and is also responsible for handling diplomatic issues.   In contrast, the consulate is generally found in larger tourist cities of a country and it is a smaller version of an embassy. Consulates generally handle minor diplomatic issues such as issuing visas and take care of migrants and tourists among other duties and responsibilities.

WHAT CONSULATE MUST I USE WHEN APPLYING FOR A U.S. VISA?

Generally, an individual applying for a U.S. visa must do so at the U.S. Consulate of the person’s country of citizenship. In the case where individuals reside in foreign counties other than their country of citizenship, they must often request permission from the U.S. Consulate of the country in which they are residing, to allow them to apply for a visa.  For example, a British citizen has taken up residence in Canada and is seeking to enter the U.S. on a visitor visa. The British citizen must demonstrate that he or she has resided in Canada for more than six months before he or she may seek a visa at the U.S. Consulate in Canada.

WHERE DID THE IMMIGRATION AND NATURALIZATION SERVICE (INS) GO?

As of March 2003, the Immigration and Naturalization Service (also known as “INS”) was split into three separate agencies. Customs and Border Protection (CBP) is responsible for enforcing immigration laws at the U.S. borders. The Immigration and Customs Enforcement (ICE) is responsible for enforcing immigration laws within the United States, such as seeking undocumented people. The U.S. Citizenship and Immigration Service (USCIS) helps with multiple immigration service functions: such processing applications for permanent residence, naturalization applications and political asylum just to name a few.

HOW DO I GET A LAWFUL PERMANENT RESIDENCE IN THE U.S.?

There are many ways to gain lawful permanent residence in the United States. Five of the major ways is by entering the U.S. as a refugee, being granted political asylum, diversity visa lottery, employment petition and family petition. There are also other ways to get LPR status but it usually involves special immigration programs normally designated for persons of certain countries.

WHERE CAN I FIND IMMIRATION FORMS?

Most immigration forms are free on the USCIS website. www.uscis.gov The website also provides the fee schedule for each type of application and the instructions. Each application form has a specific purpose and determining what forms to use may be sometimes difficult. For help feel free to contact Root Law Group for help.

HOW DO I FIND OUT WHAT HAPPENDED TO AN APPLICATION I FILED WITH USCIS?

You can easily check the status of a your pending application online at USCIS’s website. After you have filed an application with USCIS, you will receive a receipt notice which will include a receipt number that has three letters and ten numbers Another method of finding out the status of your application is by calling the toll free USCIS customer service number 1-800-375-5283.

WHO CAN PETITION FOR AN INDIVIDUAL TO COME TO THE UNITED STATES?

In the case of family based immigration, U.S. Citizens (USC) and Lawful Permanent Residents (LPR) may petition for certain family members to become permanent residents. Asylees and refugees may petition their spouses and unmarried children under 21 years of age to join them in the U.S.   When it comes to employment based immigration, any U.S. based company may also sponsor and help an individual gain LPR status. The company must meet several requirements in order to sponsor someone.

WHAT IS THE DIVERSITY VISA LOTTERY?

The diversity visa lottery also known as the “greencard lottery” holds a lottery of 50000 immigrant visas for persons from countries that have low rated of immigration to the United States. Those persons who are outside of the United Stated and are selected in the visa lottery may enter the U.S. as lawful permanent residents. Lottery winners may also apply for permanent residence in the U.S., if that individual is in the U.S. at the time he or she is selected and as long as they is status.

IS ADJUSTMENT OF STATUS THE SAME OF CHANGE OF STATUS?

WHAT IS A VAWA SELF PETITION?

VAWA stands for Violence Against Women Act. Several immigration laws passed in 1994, 2000 and 2005 that are collectively referred to as “VAWA” and which are intended to help the spouses (male or female) and children of U.S. citizens or lawful permanent residents who have been the victim(s) of domestic violence without the involvement of the abusive U.S. citizen or lawful permanent resident spouse or parent.

WHAT ARE THE REQUIREMENTS FOR NATURALIZATION?

To apply for naturalization, you must: 1) be over 18 years old; 2) have had permanent resident status (“green card”) for at least five years (three years if you got permanent residence through marriage to a U.S. citizen, and you are still married to and living with that U.S. citizen; military service may also shorten your wait); 3) have been physically present in the United States for at least 2-? years of the five years immediately before you file your application for naturalization. You must also have lived in the state where you file the application for at least three months before you file the application; 4) be functionally fluent in spoken and written English, and be able to pass a test showing you understand the basics of U.S. history and the U.S. system of government. (There are limited exceptions to this for some people, because of disability, or age and length of residency); 5) have “good moral character;” and 6) be willing to take an oath of allegiance to the United States. The oath includes being willing to bear arms on behalf of the U.S. if the law were to require it.