EB-5 Investor is a Minor

Considerations When an EB-5 Investor is a Minor 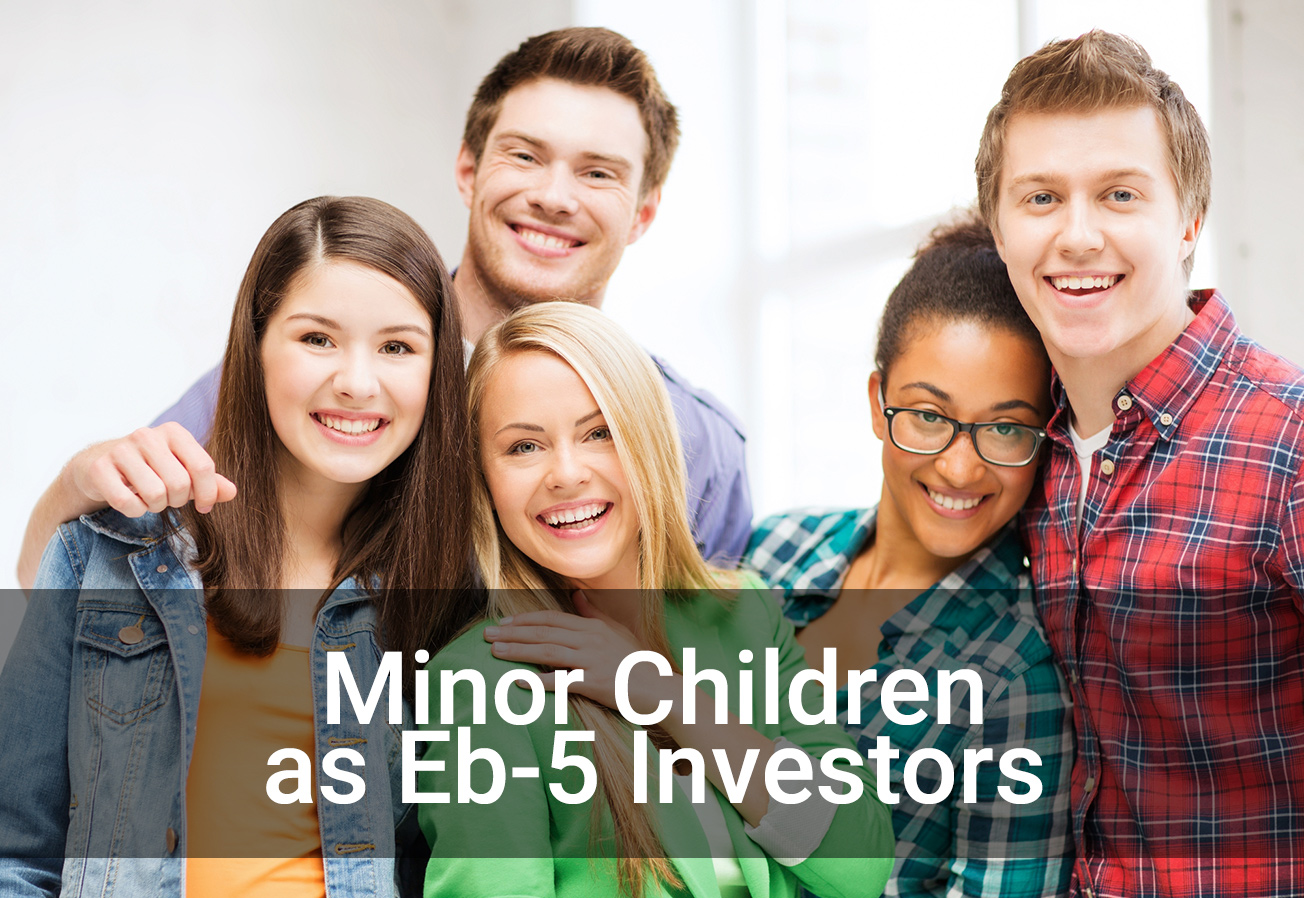 Since approximately November 2017, the U.S. Citizenship and Immigration Services (USCIS) has been regularly issuing Requests for Evidence (RFEs) and Notices of Intent to Deny (NOIDs) regarding the enforceability of purchase contracts to acquire equity units in EB-5 new commercial enterprises (NCEs) executed on behalf of investors who are under 18 years of age (commonly known as minor investors) by their parents or legal guardians/representatives.

The phenomenon of minor investors has been largely witnessed among investors from the People’s Republic of China (PRC). By having the minor investor become the petitioner of an EB-5 immigrant visa petition, families from the PRC are able to find a potential solution to the lengthy immigrant visa backlog for EB-5 visas for PRC investors, which some estimate could be almost ten years for PRC EB-5 investors filing today, and potentially longer. This strategy avoids the potential disruption caused by a dependent child “agingout” of the U.S. permanent residency process while waiting for the parent-petitioner’s priority date to become current.

For EB-5 Immigrant Investor Regional Centers, minor investors present the challenge of weaving together U.S. laws relating to subscription contracts and offerings of securities, with foreign laws relating to the validity of purchase contracts, as well as the potential for USCIS to deny I-526, Immigrant Petition by Alien Entrepreneur, filed by minor investors. This Practice Pointer examines language contained in recent RFEs and NOIDs issued by USCIS relating to I-526 petitions that have been reported by AILA members, evaluates the applicable law, and provides some possible strategies for responding to USCIS.

I. RFEs and NOIDs Relating to EB-5 Minor Investors

In the RFEs and NOIDs reported by AILA members, USCIS begins its analysis by stating that minor investors usually lack the requisite legal capacity to make a contract binding before 18 years of age. USCIS follows by noting that the contracts for the purchase of equity capital in an NCE executed by a minor Investor (or on behalf of a minor investor by their parents or legal guardians) could be voidable at the option of the minor investor upon reaching 18 years of age. Thus, according to USCIS, the minor investor could have the right to repudiate the purchase contracts signed by his or her parents with the NCE, and demand return of the invested capital upon turning 18 years of age. USCIS concludes that, under these circumstances, there is no commitment of the required amount of investment capital, or the transaction offers a guaranteed return of capital, and, accordingly, the capital is not at risk.

The RFEs and NOIDs issued by USCIS on EB-5 petitions frequently contain the following language:

“In many cases, a contract executed by a minor is voidable at the minor’s option because the minor lacks the requisite legal capacity to make the contract binding on him or her. If you have the right to repudiate the contracts and demand return of the capital, then there is not commitment of the required amount of capital. Where the capital has already been transferred to the NCE, the right to repudiate and demand return of the capital is a guaranteed return and the capital is not at risk.”

(a) State Law based on UTMA

The UTMA is a model law drafted by the Uniform Law Commissioners and sets out rules allowing minors to acquire assets when represented by an adult. The UTMA has been adopted in New York, California, Florida, Texas and most other states and U.S. territories, with some exceptions, such as Puerto Rico.

The UTMA authorizes the transfer to a minor of any asset, not simply securities, as was the case with its predecessor, the Uniform Gifts to Minors Act. The formula required by the UTMA is for the minor to be represented by an adult, referred to as a “custodian”, who represents the minor in the transaction until age 21. Under section 11 of the UTMA, a qualifying transaction transferring an asset to a minor vests ownership of the asset in the minor personally and is not voidable. The custodian has authority to manage the asset, similar to a trust or guardianship, according to the notes to the UTMA preface. The custodian’s management authority ends automatically upon the minor turning age 21, providing the minor with full powers to manage and dispose of the asset personally.

In the context of EB-5 investment transactions, the UTMA formula enables the parents of a minor investor to appoint themselves as custodians. With his or her parents as custodians, the minor investor is able to personally receive funds donated by his or her parents, and also enter into a transaction to purchase the securities offered by the NCE. The UTMA sets out specific language to be added to relevant legal documentsto enable the UTMA to apply. In the EB-5 context, these include donation documents, purchase agreements, any corporate documents or certificates of equity ownership. This language states the name of the custodian, and that the custodian is accepting an asset for and on behalf of the minor named in the legal document, in conformity with the applicable state’s UTMA. Attorneys advising in such a transaction should refer to the UTMA of the U.S. state where the contracts are executed for the exact text in each case. Under the UTMA, the statutory language should be also stated in any certificates of shares, certificates of limited liability company membership interests, or certificates of limited partnership interests.

In jurisdictions outside of the U.S., such as China, the legal age of majority is generally 18 years of age. Subscription documents and donations for EB-5 investments that are executed abroad must be binding and enforceable on the minor investor pursuant to the law of the country where the parent or legal guardian/representative was located when they executed the subscription documents on behalf of the minor investor.

China’s civil code, known as the General Provisions of Civil Law of the People’s Republic of China (PRC Civil Law), provides at Article 17 that the age of majority is age 18. The following is a general summary of the applicable PRC Civil Law that confirms that parents may enter into contracts on behalf of their child as a minor investor, and that the contract is binding and not voidable by the minor investor. Under Chinese law, persons under 18 years of age are minors with limited capacity to enter into contracts or other transactions. Minors in China are authorized to enter into contracts if they are represented by legal agents. Parents are the guardians and legal agents of their minor children. Parents acting as legal agents for their children have the capacity to create binding contracts for and on behalf of the minor investor. Thus, PRC Civil Law establishes that a contract executed in China by a parent on behalf of the minor investor creates a binding contract that is not voidable.

Federal regulations provide that children under age 14 are not able to sign USCIS forms on their own behalf.4 Other than for children under age 14, USCIS generally does not authorize a person to sign forms on behalf of another person except for certain naturalization applications and for legal representatives of persons who are mentally incompetent. USCIS recently released a Policy Memorandum on the issue of signatures, entitled “Signatures on Paper Applications, Petitions, Requests, and Other Documents Filed with U.S. Citizenship and Immigration Services” dated February 18, 2018.5

USCIS has publicly stated that minor investors can be primary applicants on I-526 immigrant visa petitions, however, the investor must provide by a preponderance of the evidence that the investment contract is valid and not voidable. USCIS made this statement during a stakeholder engagement on July 28, 2016.6 In the same stakeholder conference call, USCIS warned that minor investors bear the burden of proving by a preponderance of the evidence that they have entered into a valid investment contract that is not voidable.

III. Responding to RFEs and NOIDs relating to Minor Investors

AILA members report filing successful responses to RFEs and NOIDs by providing to USCIS evidence confirming that the parent or legal guardian’s execution of the subscription contracts and other legal documents for the EB-5 transaction for, and on behalf of, the minor investor creates legally binding, enforceable and non-voidable contracts on the minor investor.

Strategies for a successful response to an RFE or NOID issued by USCIS in this situation tend to begin with a detailed contract analysis of the text of the subscription contracts signed by the minor investor’s parents or legal guardians. Both the UTMA and foreign law, such as PRC Civil Law, require express statements to be added to the subscription contract and other EB-5 transaction documents evidencing that the parents or legal guardians are executing such agreements and documents for, and on behalf of, the minor investor and not on their own behalf.

For subscription documents executed in the United States, a transfer under the UTMA would normally be evidenced by the written text of the subscription agreements and other EB-5 transaction documents. The subscription documents executed by the parent or legal guardian/representative in conformity with the UTMA formula would be enforceable and not voidable by the minor investor. Thus, a legal opinion from a third-party attorney experienced in contract or corporate and securities law should be included with the RFE or NOID response to opine on the validity and enforceability of those contracts.

For subscription agreements executed outside the U.S., additional evidence has included:

AILA members who are considering representing a minor investor for purposes of an EB-5 immigrant visa petition should become familiar with the requirements of the UTMA. It is advisable for attorneys in minor investor cases to determine ahead of time whether the subscription contracts and other EB-5 transaction documents will be executed in the U.S. or abroad. In either case, the attorney will be required to verify that the subscription contracts and other EB-5 transaction documents are properly adapted to incorporate additional text required by the UTMA or foreign law when minor investors are being represented by their parents and legal guardians. Additionally, the analysis of source of funds tracing should also be adapted to ensure that funds invested are eligible to be treated as being owned by the minor investor, as well as complying with traditional source of funds analysis.