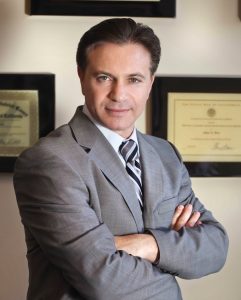 James E. Root is the Founder and Principal Attorney of Root Law Group and a leading Southern California practitioner of immigration law, criminal law and transactional law. An immigrant to the U.S. himself (as a refugee from Ukraine), he not only understands the special needs of immigrants, non-immigrants, and their U.S. employers and families, but has dedicated his long and distinguished legal career to fighting for and protecting their rights, proactively advocating for immigration reform, and providing pro bono legal services to the indigent and the elderly.

In immigration-related matters, Mr. Root has represented clients in front of Immigration Court, before the Board of Immigration Appeals (BIA), and in Federal District Court, as well as at Department of Homeland Security (DHS) offices throughout the United States — including the U.S. Citizenship and Immigration Services (USCIS), U.S. Immigration and Customs Enforcement (ICE), and U.S. Customs and Border Protection (CBP) — and at Department of State (DOS) U.S. consulates abroad. He has also published articles (which have been translated into Spanish, Russian, Polish, and Hungarian) in such periodicals and newspapers as La Opinión, Pakistan Link, Kurier, American/Hungarian Journal, 7 Days, Anons, India Journal, and India Currents.

A recipient of the Wiley W. Manuel Award for his pro bono work on behalf of the indigent and elderly clients at Bet Tzedek Legal Services, a nonprofit organization, Mr. Root has provided other pro bono or heavily-discounted legal services via referrals from the Legal Orientation and Pro Bono Program of the Executive Office of Immigration Review (EOIR), under the auspices of the National Association of Latino Elected and Appointed Officials (NALEO), and through his own initiative at Root Law Group.

Mr. Root is a regular participant and attendee of meetings, seminars and conferences hosted by the U.S. Citizenship and Immigration Services (USCIS), the U.S. Department of State (DOS), the U.S. Department of Labor (DOL), and California’s Employment Development Department (EDD). His legal expertise has led to invitations to address the California Lawyers for the Arts (CLA), the Professionals in Human Resources Association (PIHRA), and PIHRA’s local Districts.

In such matters, he has appeared in civil and criminal courts in Los Angeles County, Orange County, and San Bernardino County, as well as in and the United States Bankruptcy Court. In addition, Mr. Root has handled numerous administrative hearings in front of the Department of Motor Vehicles (DMV), the Social Security Administration (SSA), and various civil alternative dispute resolution (ADR) bodies.

Mr. Root currently lives in Encino with his wife and two children. Aside from his duties at Root Law Group, he enjoys working out, biking, hiking, reading, theatre, and — most of all — spending time with friends and family.